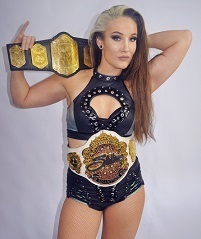 "Pinkies Up!". As the NWA World Women's Champion

and the SHINE Champion

Allysin Kay (born November 5, 1987) is an American Professional Wrestler from Detroit, Michigan best known for her work for AIW, SHIMMER, SHINE, WSU and other promotions. She debuted at the end of 2008 and has since wrestled all over the U.S., as well as in Mexico, Japan, China and Canada. She is a 2x AIW Women's Champion

with Sassy Stephie as the Midwest Militia. She also wrestled for Impact Wrestling under the name Sienna, and is a former unified Impact Knockouts Champion

, having defeated Christina Von Eerie for the title during her second reign as TNA Knockouts Champion. a 2x SHINE Champion

She has no connection to Billie Kay.