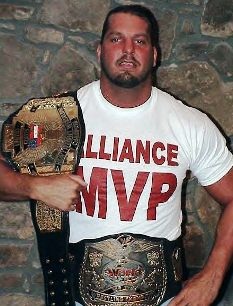 Christopher Morgan Klucsarits (January 4, 1970 – April 2, 2010) was an American professional wrestler from Sunnyside, Queens, NY, best known for his time in WCW under the names Mortis and Kanyon from 1997-2001. The Mortis gimmick was based on the Mortal Kombat characters Reptile and Scorpion as part of the Blood Runs Cold feud with Glacier. After the feud ended, Mortis dropped the mask and gimmick and became Kanyon. He held the WCW World Tag Team Titles

twice with Diamond Dallas Page and Bam Bam Bigelow as the Jersey Triad in 1999. Prior to WCW, he had also wrestled for Jim Cornette's Smoky Mountain Wrestling, ECW, and WWE as a TV Jobber.

After WWE bought WCW in March 2001, Kanyon was brought in as part of the WCW contingent in the InVasion storyline. During this time, WCW World Heavyweight Champion

Booker T awarded Kanyon the US Title, and he and DDP defeated the APA (Faarooq and Bradshaw) for the WWE World Tag Team Titles

before losing them 12 days later to The Undertaker and Kane. After leaving WWE in 2004, he competed in many independent promotions around the U.S. and Canada. He also broke ground by being one of the first wrestlers in the business to publically come out as gay

Unfortunately, Kanyon committed suicide on April 2, 2010, after years of suffering from Bipolar Disorder. His life and struggles would later be chronicled on VICE's Dark Side of the Ring show in it's third season.

Not to be confused with Mortiis.

"Whose tropes are better than Kanyon's? NOBODY'S"