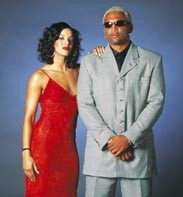 Ernest Clifford Miller (born January 14, 1964) is an American former Karateka and Professional Wrestler from Atlanta known for his work for WCW from 1997-2001. He debuted in May 1997 as Glacier's tag team partner against Mortis, Wrath and manager James Vandenberg in the Mortal Kombat-inspired Blood Runs Cold feud. Miller turned heel following the feud's end, dying his hair blond and siding with manager Sonny Onoo. His last role with the company was as the Commissioner. WWE did not pick up his contract after buying WCW, and Miller made some appearances for WWAS. He would have a run in WWE from 2002-2004 before retiring. He has made appearances in Georgia independents in the last few years. He had a major role in The Wrestler as Randy the Ram's nemesis The Ayatollah.