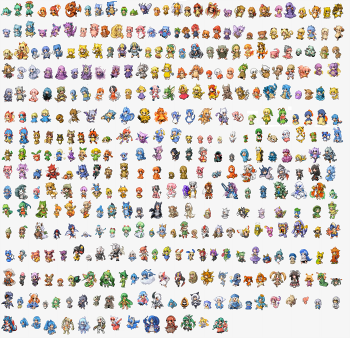 All 386 Moemon! Gotta Catch 'em All!
Ever wondered what happens when you take Pokémon and combine them with impossibly cute anime girls? Well, you'd get Moemon. Moemon (short for "Moekko Monsters") is a Pokémon romhack of FireRed that replaces all of the Mons with Moe gijinka.
Advertisement:

Most Moemon games, especially earlier ones, have no real plot changes, being the moe personifications of the Pokémon their main highlight, which obviously contribute to the popularity of the hack. After the original FireRed hack, other hacks, such as one of Emerald, emerged; however, the original and its derivatives are the most well known and referenced on sites such as Bulbapedia. The original Emerald hack also has its fair share of problems.

Many of the tropes that pertain to the original game this is hacked from also pertain here, and can be viewed on the original game's page. The game is still given some focus, as patches are released to update sprites and such, giving it improvements much like DLC does for any other game.

For some time time Moemon was limited to GBA ROM hacks of FireRed and Emerald, but other hacks have surfaced over the years using second (GBC) and fourth (NDS) generation games as a base.

There are many installments of Moemon in Japanese and some even in Korean, being just a small number the ones in English, but that number keeps gradually increasing over the years as there are dedicated groups of fans developing new installments with uptated sprites and features added in later generations for English speaking players to enjoy.

Tropes pertaining to the game:

Tropes pertaining to the Moemon: