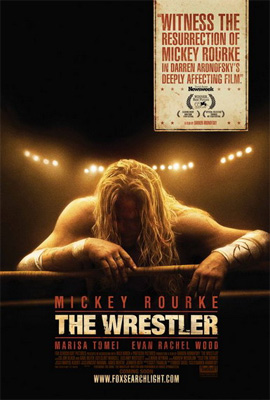 "The only place I get hurt is out there. [points away from the ring] The world don't give a shit about me."
— Randy "The Ram" Robinson
Advertisement:

The Wrestler is a 2008 drama film written by Robert D. Siegel and directed by Darren Aronofsky. The story follows Randy "The Ram" Robinson (Mickey Rourke), a professional wrestler 20 years past his prime, working match to match and part-time at a supermarket to pay his bills.

After a violent hardcore match, Randy has a heart attack and is forced to retire. As a result, he tries to find something meaningful in his life beyond wrestling — his friendship with a stripper named Cassidy (Marisa Tomei), and a new reason to attempt reconciliation with his daughter Stephanie (Evan Rachel Wood). When his old wrestling nemesis "The Ayatollah" (played by former WCW wrestler Ernest "The Cat" Miller) proposes a rematch on the anniversary of their biggest match, Randy has to decide if his life in the ring is worth the risk of death.

The matches themselves were filmed in front of actual wrestling crowds at actual wrestling events (notably, during CZW and ROH events), and Rourke trained and performed in the ring himself. It also marked a major comeback in what many called a career-best performance for Rourke, who received an Academy Award nomination for Best Actor.

Not to be confused by a movie of the same name starring Verne Gagne and Edward Asner in 1974.