Literature / The Death of WCW 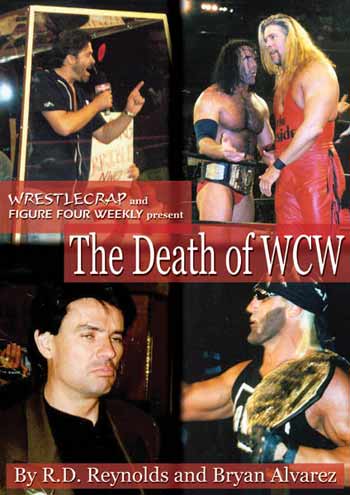 Fun fact: for a six-month period, everyone on this cover worked for TNA at the same time...note ...and yet the supposedly-inevitable sequel still has not arrived.
"Those in charge of the company never predicted that things would turn out this way, and that was perhaps the biggest irony of all: for a company that took pride in fooling its fans and even its employees, it was WCW itself that got the ultimate swerve."
Advertisement:

The Death of WCW is a book released in 2004 about pro wrestling promotion World Championship Wrestling. The book was written by WrestleCrap contributor RD Reynolds and figure4online.com

Basically an offshoot of WrestleCrap, the book is an in-depth exposé on how WCW went from a floundering business in the late 1980s to the most-watched show on cable TV in 1997 (skyrocketing to the world's most successful wrestling promotion in the process), then became little more than a laughingstock and folded in 2001. The authors tend to blame the booking decisions of Vince Russo and Eric Bischoff as well as the egos of Hulk Hogan, Kevin Nash, and a few other backstage personalities. But the finger eventually points to (pokes?) Time Warner management, which pulled the plug on WCW just as it started to show signs of life (i.e., Stacy Keibler's 42" legs) again.

In 2014, Reynolds and Alvarez released a revised and expanded tenth anniversary edition in hardcover and e-book formats. The new edition expanded on some of the WCW-related topics that the original book missed (such as the Wolfpac) and touched on how TNA has made many of the same mistakes as WCW. An audiobook version, narrated by Bryan Alvarez, was published in September 2016.

The Death of WCW contains the following tropes: