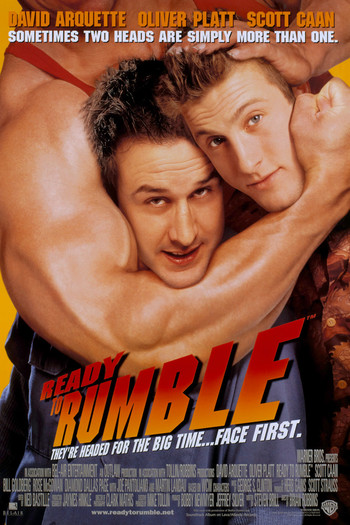 "So, about 10 minutes into this film—which only wrestling fans would see—we've been insulted by being portrayed at the bottom rung mentally, emotionally, financially, and socially. Thank you, WCW; that's very thorough. Take a bow!"
—OSW Review on Ready to Rumble
Advertisement:

Ready to Rumble is a 2000 comedy film directed by Brian Robbins, and starring David Arquette and Scott Caan.

Gordie Boggs (Arquette) and Sean Dawkins (Caan) are a pair of friends who believe that Pro Wrestling Is Real. After they witness their favorite wrestler, Jimmy King (Oliver Platt) lose the WCW World Heavyweight Championship

Compare with the WWF film No Holds Barred.

Tropes used in Ready to Rumble: