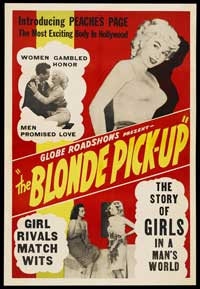 Racket Girls (AKA The Blonde Pick-up and Pin-Down Girl) is an Ed Wood-esque snoozer of a 1951 exploitation film which exists only to show women wrestling. Forever. It was directed by Robert C. Dertano.

Fresh-faced and large... muscled Peaches Page comes to the big city and is accepted as part of a gym's stable of women wrestlers. Meanwhile, the owner of the gym, who uses it as a front for organized crime, manages to get in trouble with "Mr. Big," and the subpoena doesn't help him in any way.

For the Mystery Science Theater 3000 version, please go to the episode recap page. It was also inducted into the annals of WrestleCrap in 2016.

Not to be confused with Rocket Girls.