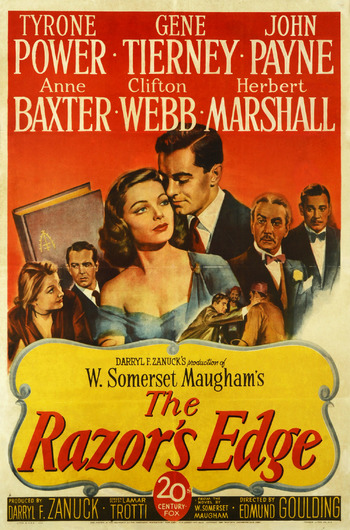 The Razor's Edge is a 1944 novel by W. Somerset Maugham, about a man's journey from shallow youth, through war and depression, to self-discovery and spiritual redemption. It was adapted for the screen twice, once in a 1946 film starring Tyrone Power and again in a 1984 film starring Bill Murray.

The protagonist, Larry Darrell, starts as a materialistic and idealistic young man that volunteers for service in World War One. There he sees the death of his friends and comrades. It changes him. He comes back home with a damaged spirit, and cannot truly enjoy the party life his friends indulge in. Larry travels to Europe, taking it easy in Paris (France) for a while, later becoming a coal miner in Lens, goes to a Benedictine monastery in Bonn (Germany), and eventually ends up at monastery in India. While there, Larry has a spiritual epiphany. The remainder of the story explores his return home and the effect his spiritual insight has with his previous relationships.

philosophy, a part of Hinduism.