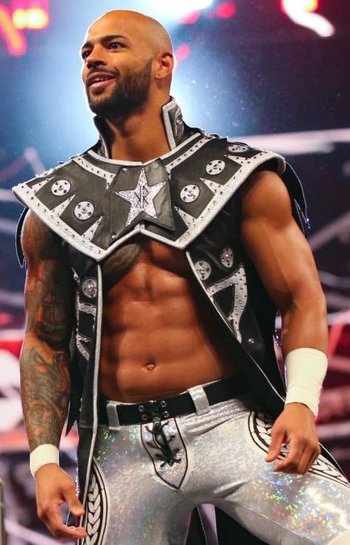 One. And. Only!
Trevor Mann (born October 11, 1988) is an American professional wrestler. Mann is a high-flying wrestler who normally goes by Ricochet, but he is also well known as the masked Helios in Chikara and as Prince Puma, the yellow-masked face of Lucha Underground.
Advertisement:

Mann first made his name in CHIKARA in 2006, when, as Ricochet, he got into a memorable feud with Chuck Taylor. Taylor kicked him out of the company a year later, but he returned as Helios a year later. In 2010, Ricochet would start go gain notoriety in promotions like Dragon Gate, Pro Wrestling Guerilla, and New Japan Pro-Wrestling. He became the face of Lucha Underground as the masked luchador Prince Puma, leaving at the end of Season 3 and signing with WWE. He debuted on NXT in early 2018, wrestling as Ricochet, before moving up to SmackDown roughly a year later. He is a one-time NXT North American Champion, WWE United States Champion, and WWE Intercontinental Champion.

Mann has won many championships and tournaments during his career, including all four major Dragon Gate titles, the King of Gate tournament, the Lucha Underground title, the Cueto Cup, the NJPW "Best of the Super Juniors" and "Super Juniors Tag Tournament", the PWG Battle of Los Angeles, and the NXT North American Championship.

For more detailed tropes relating specifically to his character as Prince Puma, see his entry on the Lucha Underground Former Roster character page.

"One and Only tropes":