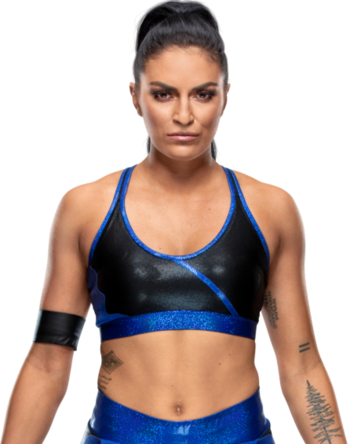 Put your hair up and square up.
Advertisement:

Daria Rae Berenato (born September 24, 1993) is an American professional wrestler and mixed martial artist. She is signed to WWE, performing on the SmackDown brand under the ring name Sonya Deville.

Berenato was a contestant in the 2015 season of WWE Tough Enough, being eliminated third. In October 2015, she signed a contract with WWE and was assigned to their developmental brand NXT to begin her training. Initially competing under her real name, she usually came up short; however, after re-debuting under the new ring name Sonya Deville, she would begin a winning streak and enter a feud with Ruby Riot.

Deville would make her WWE main roster debut on November 2017 alongside Mandy Rose as the new associates of Paige, with the trio's name being revealed as Absolution. In April 2018, Paige retired from in-ring competition due to neck injuries, dissolving Absolution, but Deville would continue her alliance with Rose as the two remained a tag team.

After eventually splitting up with and feuding against Rose, Sonya lost a "Loser Leaves WWE" match to her at SummerSlam 2020 and took time off from wrestling to deal with some personal issues. When she returned at the start of 2021, she became an on-screen authority figure alongside Adam Pearce, trading her ring gear for a sharp suit. While initially seeming neutral, she quickly established herself as a heel through petty abuses of power against female competitors such as Naomi and Bianca Belair, stacking the deck via her official powers to achieve in-ring success with minimal effort. Due to her actions, Pearce terminated her role as a WWE official on the May 9, 2022 edition of Raw and continues to compete as an in-ring competitor.

Put your tropes up and square up: