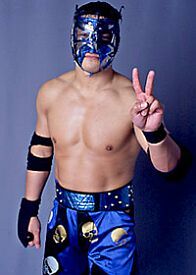 The problem child.
Tokimitsu Ishizawa (born August 5, 1968) is a Japanese Professional Wrestler and Mixed Martial Arts fighter, also known as Kendo Kashin. An accomplished high school wrestler, he joined New Japan Pro-Wrestling and was put to hone his skills under Hiroshi Hase while doing the typical young lion chorus. During the obligatory excursion abroad, CWA's Otto Wanz made him don a mask and gave him the made-up Japanese name of Kendo Kashin, and it stuck when he returned to Japan. The man previously known as Ishizawa became a strange character among his NJPW peers: a masked grappler with an unyielding attitude and a big mouth. Although crowds were initially skeptical of his submission-based style and weird promotional stunts, Kashin climbed up the scale and became a mainstay of the promotion's junior division. His career did a weirder twist when he soldiered to take part in Antonio Inoki's unlucky MMA projects, which led him to be pummeled by Ryan Gracie and buried in storyline for his defeat. After Keiji Mutoh and other wrestlers deserted for All Japan Pro Wrestling, Kashin followed him, resuming his junior tenures and featuring a characteristic title belt scandal with NJPW. He later left AJPW, and bbounced back between pro wrestling companies and uninspired MMA matches until settling down as a trusty freelancer, which he works today as.