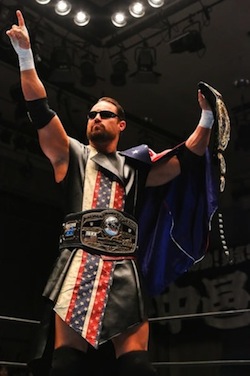 Robert Thomas Conway Jr. (born November 28, 1974) is an American professional wrestler from Louisville, Kentucky who is best known for his work in WWE from 2000-2006. Conway began his career in Memphis Championship Wrestling (MCW) and Ohio Valley Wrestling (OVW), teaming with Nick Dinsmore under the names Limited Edition (MCW), the Borkcin Brothers, and the Lords of the Ring (OVW). Together, they would win the hey would hold the NWA MCW North American Tag Team Titles

once and the the OVW Southern Tag Team Titles

3 times. From 2000-2003, he participated in several tryout matches for WWE until finally getting his break in 2003. He debuted on Raw as an American serviceman who was an ally of the French Foreign Wrestling Heel Tag Team, La Résistance (Sylvain Grenier and René Duprée). Over the course of his WWE run, he would hold the WWE World Tag Team Titles

three times with Grenier replacing Duprée, who went to SmackDown in the Draft Lottery. Afterwards, Grenier would also be traded to SmackDown and Conway would be a singles competitor named the "Con Man". Conway was released in 2007, but not before winning both the OVW Heavyweight Title and OVW Southern Tag Team Title (with Pat Buck) once more.

twice once with Jax Dane and three times with Matt Rivera. He also competed in New Japan Pro-Wrestling from 2013-2015 and returned to OVW where he once again became the OVW Heavyweight champion.