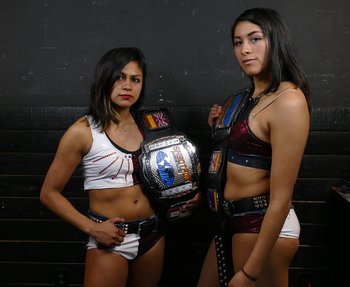 Ashley Vox (Ashley Medrano) and Delmi Exo (Elizabeth D. Medrano) are a Professional Wrestling Tag Team from Providence, RI as Team Sea Stars. Ashley debuted in 2014 with Delmi starting in 2015 and they officially debuted as a team at Us Vs. Them Wrestling (now Blitzkrieg Pro) on August 29th. They have wrestled for a variety of promotions, including CHIKARA, Beyond Wrestling, New England Championship Wrestling, Queens of Combat, SHIMMER and many others. Ashley is a former Chaotic Wrestling Women's Champion

, and Delmi was the inaugural NWE (Next Wrestling Entertainment in New Brunswick, Canada) Women's Champion