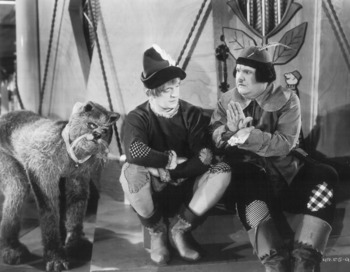 Babes in Toyland is a 1934 musical-comedy-fantasy film directed by Gus Meins and Charles Rogers, starring Stan Laurel and Oliver Hardy.

Stan and Ollie are Stannie Dum and Ollie Dee, and they live in a shoe in Toyland. They are friends and roommates with the Widow Peep (Florence Roberts) and her daughter, Bo Peep (Charlotte Henry), who is being pressured into marriage by the villain, Silas Barnaby (Henry Kleinbach). Barnaby owns the shoe and threatens to evict everyone unless Bo Peep marries him. Ollie and Stan try to raise the money for the mortgage payment, but they bungle the job, and madcap antics ensue.

Loosely based on the Victor Herbert operetta Babes in Toyland. Six songs from the show appear in this film, but it shares little plot with the show except for the general idea of Toyland.

Sometimes also called Laurel and Hardy in Toyland or March of the Wooden Soldiers.