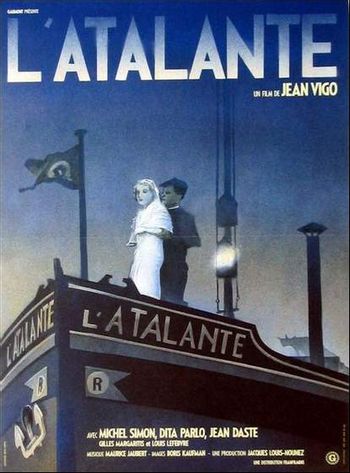 L'Atalante is a 1934 French romance/drama film directed by Jean Vigo. It is regularly hailed by critics as one of the greatest films of all time.

Quite beautiful in its simplicity; L'Atalante tells the story of Jean (Jean Dasté), captain of the canal delivery barge L'Atalante, and his newlywedded wife, Juliette (Dita Parlo). Jean, like Ratty from The Wind in the Willows, craves the river. Juliette, on the other hand, is a City Mouse who longs for excitement. As the two embark on their honeymoon - a cruise up the river - along with a cabin boy and the strange old second mate Pere Jules (Michel Simon), Juliette gets progressively more bored. She and Jean go head to head with each other as well when Jean catches her in Jules' quarters and flies into a jealous rage. When the barge arrives in Paris, Juliette disembarks for some fun. Jean, believing she has run away, casts off in a rage. Quickly, however, he regrets this, and sends Jules to go and find her, whereupon they are reunited in one of the sweetest movie endings of all time.

The film was Vigo's fourth and final; his life was tragically cut short at the age of 29. But his legacy lives on in the French New Wave, of which this is a prominent predecessor. Director Jim Jarmusch said that this was his favorite film.