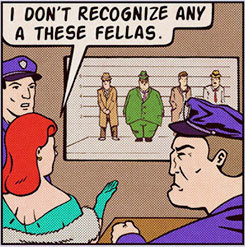 Lining up suspects for witnesses to point out who did it.

A Truth in Television trope, but fiction often plays with it. Police lineups in the real world are Serious Business, because the self-reinforcing nature of memory means that a witness who makes a mis-identification once becomes more and more certain the more times they repeat the mistake.

Shots along these lines are sometimes used to show the main cast of a series... and to imply that they're all unsavory characters or criminals, even though that isn't how lineups work. Bonus points if none of them look at all alike and there isn't even a common gender in the group.