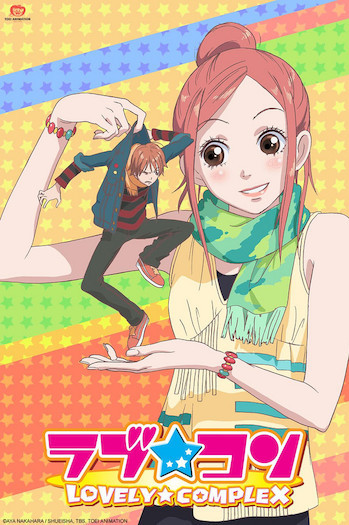 At 172 cm (about 5'7"), high school student Risa Koizumi is way taller than most other girls. This makes her very self-conscious, which she tries to cover up by acting strong-willed and sarcastic, rarely showing her more sensitive side in public. That her name means "Little Spring"Important! As in hot springs, not spring weather. adds to her problem.

Then she meets Atsushi Otani ("Big Valley"), captain of the basketball club, although he is short for a guy at 156 cm (5'1"). Otani's personality is a bit rough around the edges, so he and Koizumi don't hit it off well at first. Most of the time they try to one-up each other with snide remarks, giving them the reputation of being the high school's "All Hanshin-Kyojin" (referring to a comedy duo with one tall and one short member).

Despite all this they become good friends, since they share the same musical obsessions and zany sense of humor and they promise to help each other out with their crushes. It is only a matter of time then before Koizumi discovers she might feel more for Otani than just friendship. But does he feel the same for her too, since she is way taller than he is?

Lovely Complex is a Romantic Comedy Shoujo manga by Aya Nakahara that was serialized in Bessatsu Margaret from 2001 to 2006. It has been adapted as an anime by Toei Animation that aired in 2007, and a live-action movie starring Ema Fujisawa as Koizumi and Teppei Koike as Otani. The manga also counts with a compilation of extra stories that was published a few years after the original ending of the manga, Love Com D.

Viz Media licensed the manga series in the U.S., while Discotek Media released the anime series as sub-only in 2012.