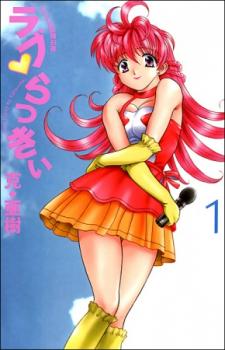 Love Lucky is an ecchi romance manga written and illustrated by Katsu Aki, the author of Futari Ecchi. The manga ran in Weekly Young Magazine from 2003 to 2006.

Salaryman Fuuta Kinashi has always had terrible luck with women. Most of his relationships end up with him getting beaten up by angry boyfriends he previously knew nothing about, extorted for money, or both. The only thing that keeps him from succumbing to loneliness and despair is his love for the well-known Idol Singer Kirari, whose songs make him feel hope that even he can one day find true happiness.

His fate begins to change when he arrives at a meeting set up by a match-making service, only to find that his date is wearing a mask that completely covers her face, nearly totally hiding her appearance. Accepting her explanation that she's painfully shy, Fuuta decides to go through with the date as planned. Slowly he finds himself falling for this mystery girl's sweet and shy demeanor, despite the fact that she insists on wearing a different disguise each time they meet. Ultimately deciding that her looks don't matter, the two of them get married.

When the newlyweds arrive at Fuuta's apartment on the night of their wedding, the nervous young bride finally decides to remove her mask... revealing to the shocked young man that she is actually Kirari, the pop star he's been head-over-heels in love with for years. She explains to Fuuta that she had been hiding her face in hopes that she could find someone who loved her for who she truly was instead of for her fame and fortune.

The dumbstruck Fuuta is unable to believe his luck, until Kirari informs that in order for her record company to accept their marriage, they must keep it a secret from the world for one full year... and if anyone discovers their relationship before then, they will be forced to get a divorce. Suddenly thrust into a life of overbearing managers, fan-hating pop stars, and unrelenting entertainment reporters, Fuuta decides that no price is too high to pay for true love. Thus, the newlyweds swear that they will do whatever it takes to stay together, so that together they can finally become "Love Lucky.