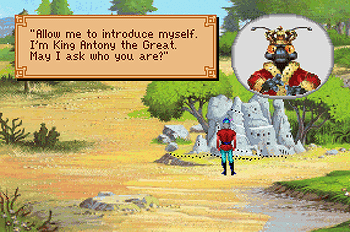 There are no king ants.
Adam: Today we are MEN!
Barry: BEE men!
— Bee Movie
Advertisement:

It's a fact that throughout history, mammals including humans have dwelled in mostly patriarchal societies where the males are dominant and females are primarily childrearers. Because of this, the queen bee was called a "king" by beekeepers until dissections under microscopes in the eighteenth century showed them to be female. Since then we have come to realise that most organized insect hives are started, run and overwhelmingly populated by females. In Hymenopteran social insect colonies (ants, bees, wasps, etc.), females are the only ones who have any semblance of a job, and are responsible for all the work involved in running things, such as building, foraging, defending from outsiders, and most especially creating eggs for the continuation of the swarm. The males? They have sex and then die - or are eaten (or sometimes both).

Fiction often fails to acknowledge this. Instead intelligent insects in fantasy media will usually have as a hero ... a male worker? The fact that the ant and bee workers are all females (albeit sterile), and the only males are Drones created solely from the genetics of the queen to fertilize queens of a different colony and quickly die after this mission is complete, sometimes by the queen ripping the male's genitalia out of his body, seems to have no bearing on this trope. It probably doesn't help that, in normal usage, a "drone" is someone or something who works mindlessly, leading to them being confused with the worker ants, who are a separate caste.

Fiction also tends to show an even or near even split between males to females, when there are barely a few hundred males for thousands of females in most insect societies due to the nature of how sexes are decided.

Note that termite hives are much closer to human expectations. Termites aren't related to bees, ants, and wasps (they're actually closer to cockroaches), so they evolved eusociality completely separately. For example, reproductive male termites don't die after sex—they spend the rest of their lives in the nest with the queen, and are called "kings". The workers can also be either male or female. Surprisingly (or maybe not), few fiction writers have taken advantage of this.

On its way to becoming a Cyclical Trope. More realistic portrayals of insect societies sometimes appear in works mining it for social or political commentary, or in science fiction intentionally using its unfamiliar nature to make insectoid aliens feel more strange.

This trope also applies to biting male mosquitoes, when in reality, only female mosquitoes bite.note But male stable flies (a bloodsucking relative of the house fly) do.

A subtrope of Artistic License – Biology. Can be combination of Somewhere, an Entomologist Is Crying and Most Writers Are Male. Subtrope of Animal Gender-Bender. Can be an example of the The Smurfette Principle.