Video Game / Way of the Samurai 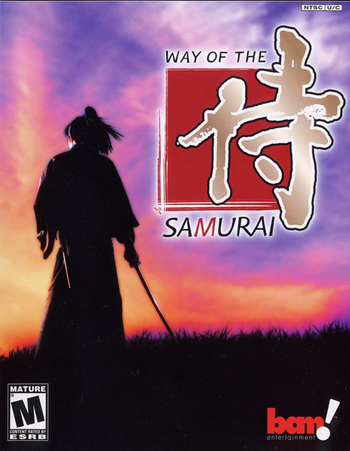 There was also a Gaiden Game released for the PS2 in 2005, Samurai Western, which was a more action-centered game that amounted to Way of the Samurai IN THE WILD WEST!

Each game follows the same basic plot: a wandering ronin arrives in a village that is in the middle of a vicious conflict between various factions. The ronin may choose to align with any of the factions, play them against each other for their own ends, try to help the villagers caught in the middle, or simply go about their days without taking sides. Depending on your actions, the plotline branches and changes accordingly, and there are plenty of endings to be found, ranging from taking a position of power to leaving the village in ruins to having your journey cut short.

As the name implies, the games revolve heavily around fighting (though each game offers at least one route you can perform a Pacifist Run on), mainly with swords (though other weapons, mostly spears, are available in the later games... and were treated like 'side stance swords' in WotS2). Each game boasts a wide selection of weapons; however, the player only begins with a single sword to their name, and can only carry a limited amount of weapons with them. Weapons can usually be stored though an in-town service or completing a playthrough, and can be selected as your starting weapon during your next game.

Way of the Samurai also allows a certain amount of Character Customization, mostly in the vein of Virtual Paper Doll: you have a variety of heads, bodies, and accessories to choose from.

Way of the Samurai contains examples of: