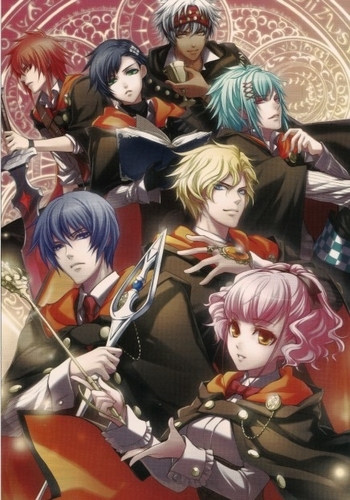 Wand of Fortune is an Otome Game series by Idea Factory (Otomate) that takes place in a medieval fantasy city called Latium. The story centers around a cheerful 15-year-old girl (default name Lulu, but you can decide to change it at the start of the game) who travels to Latium in order to study at Mirus Clare (taken from Latin: mirus means "wonderful," and clare can either mean "bright" or "famous"), a renowned school of magic. However, when the two School Presidents Ivan and Vania administer her the test to determine her element, they discover that she doesn't have one. Seeing her crestfallen they explain to her that she could acquire one through interactions with others—others being, of course (this is an otome game, after all) six Bishounen, each of whom belongs to a different element.

Wand of Fortune has been released in the PlayStation 2, PlayStation Portable and Play Station Vita platforms. Several of its stories have been officially translated in English through the Story Jar app by Solmare. It also has two fandiscs and a sequel, making it one of the Long-Runners among Otomate's franchises.