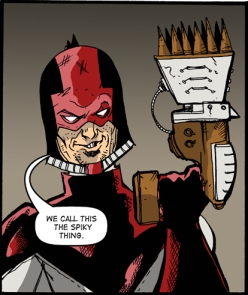 We call this the Spiky Thing.
Advertisement:

is produced by Minion Comics and updates Monday and Wednesday.

The comic is about two unemployed losers who take jobs as henchmen with an evil organization, after one of them, Spencer, gets convicted of theft and is unable to find a job. The organization is ostensibly dedicated to promoting freedom of information by hacking into government and corporate secret files.

Not related to the fantasy Web Comic Minion.