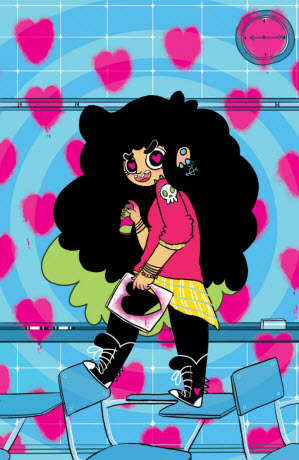 "Hey TV Tropes! Over here! It's me, Jonesy! Welcome to the worst day ever!"
Advertisement:

Meet Jonesy, typical teenager who lives in the small town of Plymouth. Nothing really special about her, she hates Valentines Day, she writes fanzines as a hobby, loves her ferrets, has a father that works in the best donut shop in town and goes though the usual motions of growing up.

Oh yeah and she has SECRET LOVE POWERS i.e: the ability to make anyone fall in love with something...save herself.

As you can imagine she sometimes uses this ability for her own benefit, but as is the case, they sometimes have a method of backfiring on her, forcing her to face the music and solve her problems herself. But Jonesy has a good head on her shoulders and tries to make things right where she mess up. Needless to say, Hilarity Ensues.

Created by Sam Humphries & Caitlin Rose Boyle and published by Boom! Studios. Ran for 12 issues from Feb 2016 to April 2017.