Film / The Terror of Tiny Town 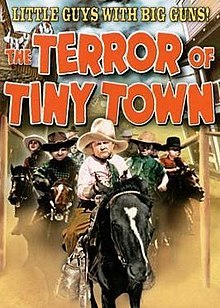 The Terror of Tiny Town is a 1938 American film produced by Jed Buell, directed by Sam Newfield, and starring Billy Curtis. It is the world's only musical Western with an all-midget cast. Using a conventional Western story with an all midget cast, the filmmakers were able to showcase gags such as cowboys entering the local saloon by walking under the swinging doors, climbing into cupboards to retrieve items, and midget cowboys galloping around on Shetland ponies while roping calves.

In the Old West's Tiny Town, Bat Haines pits two ranching families, the Lawsons and the Prestons, against each other by stealing their cattle and blaming the other family for the thefts. Haines blackmails the sheriff, who is an ex-convict, into taking no action, then attacks a stagecoach carrying Nancy, the niece of Tex Preston. Nancy is rescued by Buck Lawson, and the two fall in love. Billy then battles Haines to stop the feud.

The Terror of Tiny Town contains examples of: