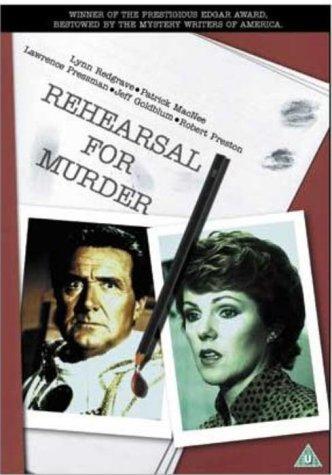 Rehearsal for Murder is an American murder mystery television film starring Robert Preston and Lynn Redgrave, and directed by David Greene. The script, written by Richard Levinson and William Link, won a 1983 Edgar Award from the Mystery Writers of America.

When his leading lady (and fiancée) Monica Welles (Redgrave) is found dead from an apparent suicide after the opening night of her Broadway stage debut, playwright Alex Dennison (Preston) is left heartbroken. On the first anniversary of her death, he gathers the cast and crew from that ill-fated night in the same Broadway theatre, ostensibly to read a new play he is working on, a mystery in which a famous actress is killed. As the reading progresses, the scenes seem to the cast to be uncomfortably close to actual encounters they might have had with Monica. When pressed, Alex finally reveals that he believes that Monica was murdered, and that someone at the theatre is her killer.

Rehearsal for Murder contains examples (or does it?) of: