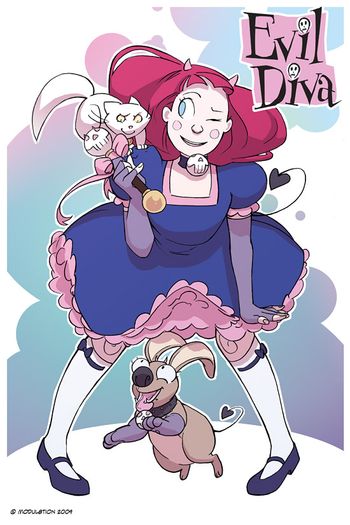 is a webcomic by Peter Menotti and Joe Cashman - drawn by Cassandra Wedeking and inked by Severin Piehl. It's set in a modern world where angels and demons go to school and work together. Starring the titular Diva Beelze, an average 12-year-old girl who although being a devil, can only find herself doing good things for others.

Or this was the initial plot of the comic. After losing a staff member on the production team, there has since been a Time Skip. The comic is now about a fifteen year-old girl in a new setting. The comic, which was previously light-hearted, is now about the serious business of being a Super Hero in issue seven, complicated teen romance in issue nine, and tricky personal introductions in issue ten. Officially, the comic is about fighting crime with the power of balance.

Not to be confused with the trope Evil Diva.

The first two chapters seemed to have returned, retconning the rest of the deleted chapters.