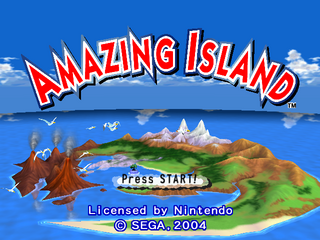 Amazing Island is a video game developed by Hitmaker/Ancient and published by Sega for the Nintendo GameCube. In it you play as a boy or a girl and are whisked off to Amazing Island after reading a book. Upon your arrival, the place is covered in a fog and under the rule of the Black Evil.

You're supposed to save the island and its residents or the world of Amazing Island will fade into nothingness. Using the power of imagination, you create a monster to participate in obstacle courses to recover the lost orbs and become strong enough to defeat the Black Evil.

The game comprises two features, a rather open-ended monster creator/editor and the obstacle courses, mini-games which are required to progress in the story. Beating the minigames with certain point thresholds unlocks additional monster-raising accessories, as well as monster frames, giving you more options when creating monsters.