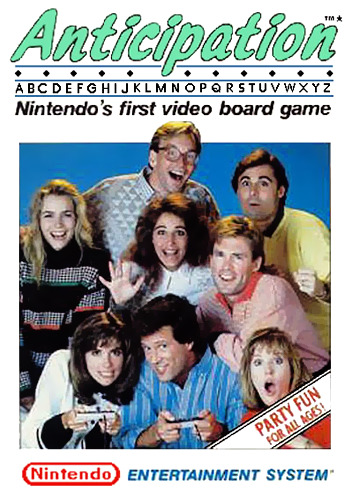 First to guess the decade gets to be Player One!
Anticipation is a party board game-style video game for the Nintendo Entertainment System. It's developed by Rare and published by Nintendo. It was the first NES game to use the Four-Score adapter.
Advertisement:

In this game, a colored square will reveal in the center and a video pencil will draw a picture as a die counts down from six. The gamers must buzz in and answer what the picture is. If they guess two wrong letters or they waste time, they will be locked out from guessing the current puzzle; if all four players are locked out, the game will report No-One Can Answer, and players will be presented with a new puzzle from the same category and color. A player who wishes to answer must buzz in before the die reaches zero. If a player solves the puzzle, the player will move a number of spaces equal to the face showing on the die.

So yes, it's basically Pictionary, only in video game form, and surprisingly, better in quality compared to the actual NES Pictionary game.