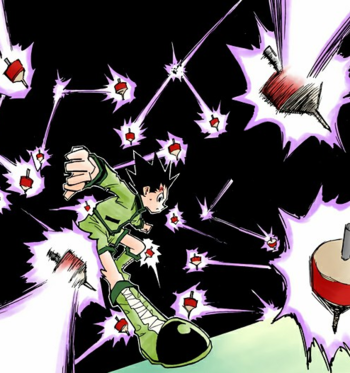 LET IT RIP!
"Spinning round me, things are finally happening
Step up to me; this dance fight will be legendary
Their chances are thinning
I dodge bullets when I'm spinning
New plans are just beginning
I've hit the top!"
— The Megas, "Can't Stop the Top"
Advertisement:

It moves too fast to touch, yet it stays in one place. It's so stable, military jets use them to stabilize themselves. And it's so cheap and plentiful, every toy store's bargain bin has them. It's the gyroscope, also known as the top. And in the world of fiction, there are some who decide to weaponize them. There are two common ways to go about this:

The first is to spin some tops, then throw them. They will either throw them at the opponent, counting on the impact force plus it being a rapidly-spinning object; or they will throw them at the ground, where they will either stay in place and deal damage to anyone who touches them or drift around along the ground, making it difficult for opponents to maneuver around. Tops differ from other ground-based obstacles in that they trace irregular paths and will move faster when they touch each other. In rare instances, it's not so much that it spins as much as the spinning creates something more dangerous, such as whirlwinds or lightning. In these cases, a top is the optimum shape for something to spin around real fast without any additional input of energy or anything to hold on to the object.

The other approach is to actually spin themselves like a top as an attack. This is distinguished from ordinary Spectacular Spinning in that the fighters are either shaped like a top by default or can convert themselves into a top-like shape, with a point at the bottom. They follow top-like movements and may have a long stick over their heads. May overlap with Spin to Deflect Stuff in this sense.

Whether they deploy tops or spin like one, there is always the option to make them even more painful to touch by modifications, such as spikes or blades along the rim to create a makeshift and portable buzz saw, using durable materials to be reused again and again, or to tweak the weight for maximum kinetic force.

In any case, expect these characters to have very good balance.

Subtrope of Improbable Weapon User and Spectacular Spinning. When the axis of rotation is turned parallel to the ground and a string thrown in, it's Killer Yo-Yo.