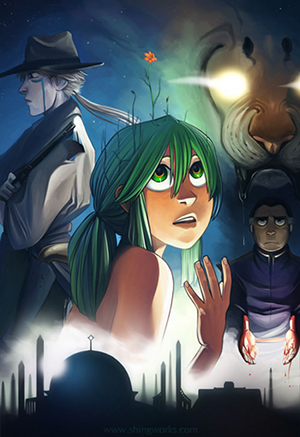 "Find the center, the lost one will know the way. A woman who cries but sheds no tears, and a man who hates in the name of love."
Advertisement:

, by writer and artist Der-shing Hilmer (Mare Internum), is a graphic novel about Angora, an inexperienced young girl who has been sent on a quest to save the world. War looms on the horizon, and at its helm is Luca DeSadar, the Emperor of the North, and his hellish adviser. The two countries are overwhelmed with as much terror, crime, disease and revolution as they are with those who wish to create peace. Soli is a woman looking for money and revenge, though not necessarily in that order; what's her role in all this? Armed with only her instincts and an unexplainable power Angora must experience and judge the world to decide once and for all if it is truly worth saving.

Readers take warning, the first chapter is definitely Not Safe for Work. You know, 'cause she's naked for most of it.

, a prequel is on Der-shing's Patreon here

and a mirror to the comic can be found here

While the comic has not been officially cancelled, Chapter Six's cover was posted in December 2018 and the first page was not published until February 2020 with no pages published since then.

The Meek contains examples of: