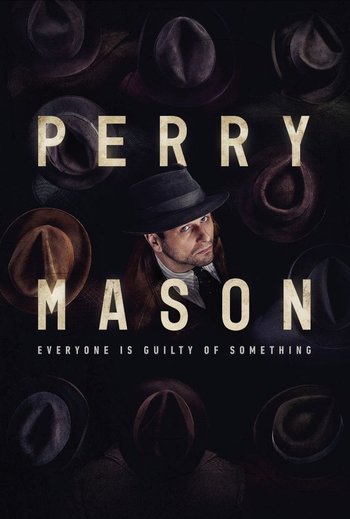 Perry Mason is a 2020 TV series based on the iconic character of the same name created by Erle Stanley Gardner. The show was created by Rolin Jones and Ron Fitzgerald and produced by Robert Downey Jr.. It stars Matthew Rhys as Perry Mason, Juliet Rylance as Della Street, and Chris Chalk as Paul Drake. Tatiana Maslany plays Sister Alice, a charismatic evangelical minister; Shea Whigham plays Pete Strickland, Perry's partner in a private detective business; John Lithgow appears as E.B. Jonathan, a lawyer who employs Perry as a private detective.

Serving as an Origin Story to the novels, this series takes place in Los Angeles in 1932, a world caught up in the wealth of the growing motion picture industry, an oil boom, the upcoming Olympics, and the rise of a Christian Revival movement. In the midst of this Perry Mason is working as the PI to Crusading Lawyer Elias Birchard 'E.B.' Jonathan (Lithgow). Perry finds himself caught in the case of a lifetime: infant Charlie Dodson is kidnapped for ransom and murdered. His mother Emily is arrested and charged with complicity in her son's kidnapping. The Charlie Dodson case becomes a major scandal that threatens to shake the city and its power structure to the core.

The series premiered on both HBO and HBO Max on June 21, 2020. A second season has been ordered, with Katherine Waterston joining the cast.