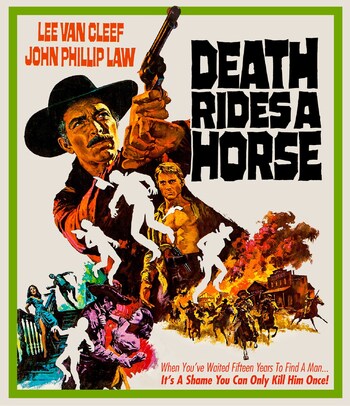 When You've Waited Fifteen Years To Find A Man... It's A Shame You Can Only Kill Him Once!
Advertisement:

Da a uomo a uomo ("As man to man"), known in English as Death Rides a Horse, is a 1967 Italian Spaghetti Western film written by Luciano Vincenzoni (The Good, the Bad and the Ugly), directed by Giulio Petroni, and starring Lee Van Cleef and John Phillip Law.

When Bill Meceita (Law) was a young lad, he watched his mother and sister get brutally raped and murdered by a gang of outlaws. Now, fifteen years later, he has become an expert gunfighter and is out to find and kill the ones who did it. At the same time, an older man named Ryan (Van Cleef) has just gotten out of jail for a robbery the same gang committed. Both men meet up, and go on a Roaring Rampage of Revenge against the gang that wronged them. However, Ryan has a secret that threatens to tear the duo apart.

It has mostly been distributed by United Artists, but has also been released by Sony in Australia and 20th Century Fox in the Netherlands.