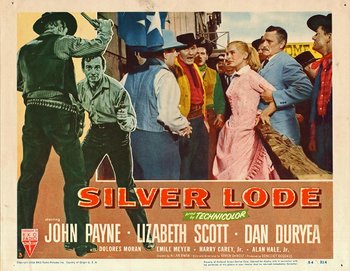 On the Fourth of July, the wedding day of Dan Ballard (Payne) and Rose Evans (Scott), four armed men ride into town. Their leader (Duryea) tells the townspeople that he's a US Marshal with a warrant for Ballard's arrest. The charge is murder and theft. The townspeople react with disbelief and distrust at these strangers riding into town with accusations, as Ballard is a well-respected member of the community. But then again, he did arrive in town only two years ago, and he had a large amount of money when he did...

The plot bears more than a passing resemblance to the much more famous Western High Noon, which was released two years earlier in 1952. Both films deal with a man in a small town losing the support of the townspeople, and both films play out in (roughly) Real Time. High Noon has been widely interpreted as an allegory for McCarthyism; the makers of Silver Lode apparently decided that High Noon was too subtle and named the main antagonist McCarty.