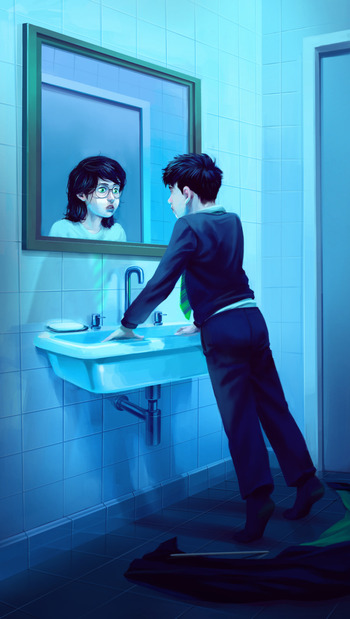 The best Potions student Hogwarts has ever seen. Image by blopoooo

.
Harriett: Thanks for letting me borrow your name, Arch. I'll try not to blacken it too much in the next seven years.
Arcturus: (grinning) Do your worst.
Advertisement:

In a World… where Tom Riddle launched a political party instead of a war, there is widespread and legally enforced discrimination against non-purebloods. Harriett Potter grew up with both of her parents and all of the Marauders alive and well, but as a half-blood, she isn't allowed to attend Hogwarts (and worse restrictions are coming). She isn't going to let that stop her from getting a world-class Potions education under Professor Snape, though, and so she plots with her pure-blooded cousin Arcturus Black to swap identities during the school year. Too bad that they didn't realise how outstanding she could really be, and how much attention "Rigel Black" would attract from those who would use or control "him" — especially Tom Riddle himself.

aka "Violet Matter", drawing on elements of the Song of the Lioness:

Book five is in progress as of December 2021.

open/close all folders
#-B
C-D
Advertisement:
E-G
H-L
M-P
R-S
T-Z
Even if this blows up in our face and they kick me out before the first wick check, I'm saying right now: I don't regret anything.