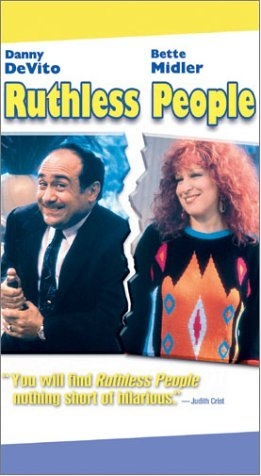 [to the kidnappers] "What do I have to do? Put a gun in your hand, aim and pull your finger down, you spineless wimp?! [cue Ken sagging in defeat] I dare you to kill her! [hangs up] Now that oughta do it!"
— Sam Stone
Advertisement:

A modern update of O. Henry's "The Ransom of Red Chief"note Though Dale Launer, the film's writer, claimed he had based the film on the abduction of Patty Hearst

, and that any similarities between the film and the short story were coincidental, Ruthless People is a 1986 Black Comedy film that has the distinction of being the only traditional, non-Rapid-Fire Comedy by the Zucker, Abrahams and Zucker team. It also proved to be the last time all three men would direct as a trio.

Businessman Sam Stone (Danny DeVito) is planning to murder his wife Barbara (Bette Midler), but before he gets the chance, she's kidnapped by a married couple who Sam cheated out of their life savings. Sam is overjoyed at this turn of events, since it saves him the trouble of killing her himself. Unfortunately for him, they're not very good at the kidnapping thing, and fail to be the ruthless people they claim to be. They're incapable of harming Barbara, even as she verbally assaults them and Sam ignores their instructions, refuses their demands, and eventually tries to goad them into violence.

Meanwhile Sam's mistress, Carol, and her other boyfriend, the incredibly dim-witted Earl, are plotting to blackmail Sam for Barbara's murder, and things go even more awry.

Confused yet? Well don't worry, it all makes sense when you see it. The "drama" is all Played for Laughs to make for a very funny movie which features attack dogs, an accidental extortion of the area police chief, a seemingly-unrelated Serial Killer, and quite possibly the stupidest person on the face of the earth.

The opening credits to Ruthless People. I could tell you who's in the movie, and who designed the credit sequence and all that, but why would I do that when you could just watch 'em?

The opening credits to Ruthless People. I could tell you who's in the movie, and who designed the credit sequence and all that, but why would I do that when you could just watch 'em?