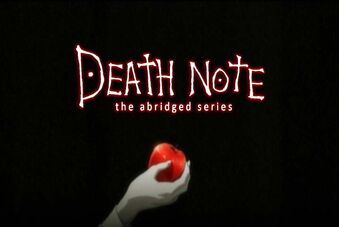 based upon Death Note. The 1st season consists of 14 episodes. The 2nd season has 16 episodes. There is also "Re-Ryuk" which is a mock episode of Season 1, Episode 1. They also have had parody music videos and contests to encourage fan participation. They are the first Death Note Abridged Series to ever completely finish.

This series focuses on Light and how he is trying to get rid of any famous celebrities that he doesn't like, primarily teen idols. Like the original anime, he is also trying to become god of a new world. Light and L are pretty much the only smart ones in the series, but the side characters have quite a few memorable moments. Even the creators of the show have a power struggle throughout the series. Oh, and Matsuda is Australian.

Some episodes of the show have been taken down for copyright reasons, but the creators have posted on their Facebook

a backup of the full series, available for download here