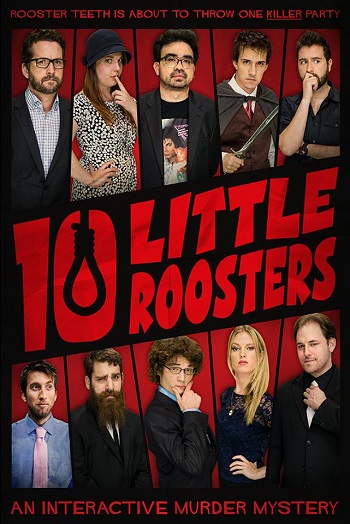 Ten little roosters all gathered to dine...
"You've all got blood on your hands. And now you're all going to pay."
— Michael Jones, Episode 1: "And Then There Were Nine"
Advertisement:

Ten Little Roosters is a 2014 murder mystery comedy web series created by Rooster Teeth, consisting of eight episodes that aired weekly from November 4 to December 23. The series is an affectionate parody of Agatha Christie's novel And Then There Were None, with its Ten Little Murder Victims premise directly lifted from the original book.

The series takes place at the inogu...inaugg...first banquet held at the Rooster Teeth office by Burnie Burns with nine other Rooster Teeth employeeslist  Lindsay Jones, Gus Sorola, Chris Demarais, Miles Luna, Gavin Free (technically him and a clone, but they're treated as one person), Adam Ellis, Michael Jones, Barbara Dunkelman, and Ryan Haywood. However, the party goes downhill when Michael accuses everyone of committing serious crimes in the past, saying that one person is guilty of "cold-blooded murder".

Shortly afterwards, the guests find a poem taped to the wall written in the style of the original "Ten Little Soldiers" poem (said poem can be read in full here

◊), and from the first episode it becomes clear that the poem is outlining the murders of all but one of the party guests over the course of the night. Everyone is then locked in, and they must figure out who the killer is among them.

After the first episode, viewers were asked to submit guesses as to who the killer was and who the survivor would be (confirmed to not be the killer). After each episode aired, viewers were also asked to guess who would die in the next episode, as well as how they would die.

The list of the victims, how they died, and the eventual survivor is as follows:

As these tropes relate to a murder mystery with nine different murders and multiple plot twists, beware of spoilers below.

A sequel series, The Eleven Little Roosters, was announced at RTX 2015, in which the survivor of the series is recruited by an international spy agency to root out The Mole in a group of 18 assassins and spies from 11 agencies around the world. A prologue series, Assassin Superstars 360, premiered on December 20, 2016, and the official series premiered on January 16th, 2017. This time, with the exception of the survivor, characters are original characters, and not RT employees playing fictional versions of themselves. Both series were then followed by another Spiritual Successor series, Dead Little Roosters, in 2021.

Not all who work here are fucking nerds.
— Sorola

The killer was killed... and then there was one.