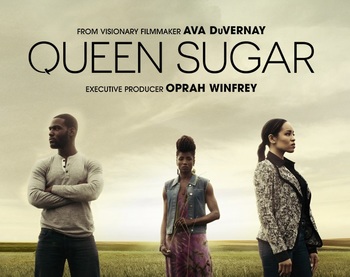 Queen Sugar is an America family drama airing on OWN. It was created, directed, and produced by Ava DuVernay. Oprah Winfrey is also a producer. The series is based on the novel by Natalie Baszile. It tells the story of three siblings who are forced to work together to run the family sugarcane farm after the unexpected death of their beloved father. The series premiered on September 6, 2016. On August 1, 2016, the series was renewed for a second season.

Nova, the eldest, is a determined journalist and activist trying to change the corrupt New Orleans police department. Charley, the middle child, lives a charmed life in Los Angeles until a scandal threatens to tear her family apart. Ralph Angel, the youngest, struggles with getting his life back together after being released from prison.