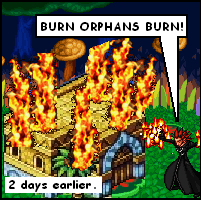 The first strip. It pretty much goes downhill from here.
"Ansem Retort: Combining comedy and cancer into a delicious fruity mix."
Advertisement:

Yeah, it isn't the nicest of webcomics out there.

Ansem Retort ended in December 2012. Author Duke had previously said that there would be No Ending, he'd just stop updating the comic when he was done with it, and that's exactly what happened. In May 2017, the website finally went offline, which means Ansem Retort is now only available through fan archives of the comic, like this one