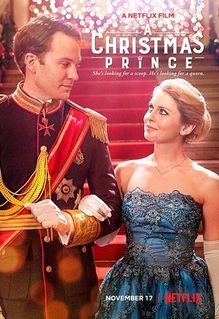 "To the 53 people who’ve watched A Christmas Prince every day for the past 18 days: Who hurt you?”

A Christmas Prince is a 2017 American Christmas romantic comedy film that debuted on Netflix in November 2017 and stars Rose McIver (iZombie) and Ben Lamb.

Amber Moore (McIver) is a journalist tasked with uncovering why Prince Richard of Aldovia has gone MIA, despite being slated to take the throne before Christmas Day. She gets an in when the palace staff mistakes her for Princess Emily's new American tutor. However, in the process of uncovering the truth, Amber grows closer to Richard and becomes increasingly reluctant to expose the royal family's secrets.