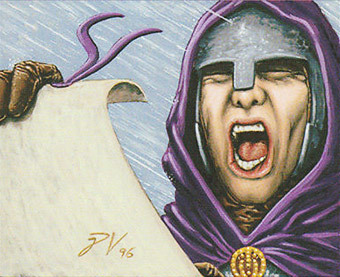 "By order of his royal majesty, all thy base are now belong to he!"
"We have arrived, and it is now that we perform our charge. In fealty to the God-Emperor, our undying Lord, and by the grace of the Golden Throne, I declare Exterminatus upon the Imperial world of Typhon Primaris. I hereby sign the death warrant of an entire world, and consign a million souls to oblivion. May Imperial Justice account in all balance. The Emperor Protects."
— Ordo Malleus Fleet, Dawn of War II: Retribution
Advertisement:

A formal and ritualized decree is a common device in fiction, used to add a sense of grandeur to otherwise simple proceedings. These often begin with a reference to the person(s) promulgating the decree, and might even spell out all the titles they hold. What follows is usually either a generally applicable instruction or a list of demands. In either case, the decree has the force of law.

As the name of this trope suggests, such decrees are usually made by or in the name of a sovereign ruler. Rulers may utter their decrees personally (particularly when the decision is a reaction to a specific incident or discussion in their presence), often with a noticeable alteration of their voice. Alternatively, they may have it read out by someone specifically charged with the task.

In some cases, a decree of this legally-binding sort is issued by a group of people, such as a regency council that governs in the name of a child or an incapacitated ruler. Other groups issuing such decrees include town councils of free cities and religious authorities of The Church (especially of the fantastic variety).

Can overlap with Balcony Speech.