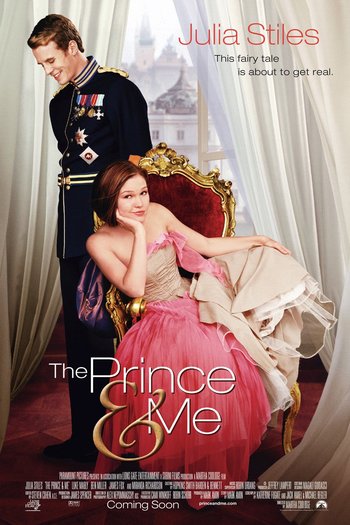 The Prince & Me is a 2004 Romantic Comedy directed by Martha Coolidge, about the developing relationship between American premed student Paige Morgan (Julia Stiles) and Danish Prince Edvard (Luke Mably), a playboy who decided to attend college in Wisconsin in order to party as much as possible. Edvard, or "Eddie", orders his chaperone to help him keep his identity quiet, and hides it from his fellow students, including Paige. Despite a rather poor beginning, the two eventually get along, learn from each other, and fall in love. However, when Eddie's identity is inevitably revealed, drama ensues due to the clash between Paige's dreams of becoming a doctor and his responsibilities as a crown prince.

Despite barely being noticed when it came out, the film spawned a Direct to Video franchise. Sequels include:

Not to be confused with The Prince And I.