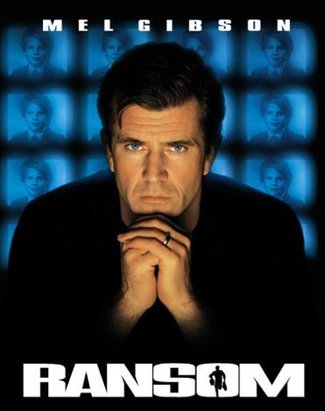 Ransom is a 1996 thriller film, directed by Ron Howard. It was intended as a loose remake of "Ransom!" (1956), but ended up barely resembling its predecessor.

Then their demand for ransom is raised, two million dollars. Some character conflict is introduced among the kidnappers. The more ruthless ones want to kill the kid anyway to avoid identification; the others want to release the boy, even risking identification. They agree to disagree until their ransom demands are met.

The story proceeds in the familiar pattern of the original film for a while. Tom gathers the money, but not as ransom, but turns it into a bounty on an instinct that he will not get his son back alive, turning the kidnapping into a game of cat-and-mouse as both Tom and Shaker turn increasingly desperate to get what they want.

The movie was a massive success, the fifth-highest grossing film domestically in 1996, marking another high point in the blockbuster careers of Gibson and Howard after both had a big presence at the Academy Awards earlier in the year, representing Braveheart and Apollo 13, respectively.