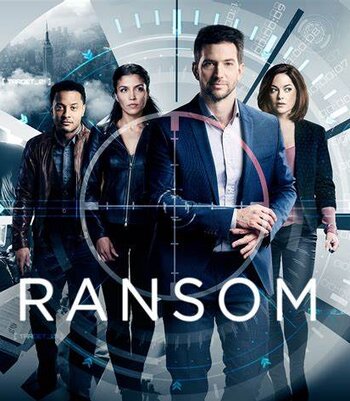 The clock is ticking.
Advertisement:

Ransom is an internationally co-produced television drama series that first premiered on January 1, 2017. The series is a collaboration between CBS (U.S), Global (Canada), TF1 (France) and RTL (Germany). The show stars Luke Roberts, Nazneen Contractor, Brandon Jay McLaren and Sarah Greene. The show was to be cancelled after its first season due to mediocre ratings and both CBS and RTL withdrawing their support for the show. Global and TF1 managed to rescue the show from cancellation, and CBS eventually changed its mind.

Crisis Resolutions is a private security company in the US that hires its services to individuals and governments who can afford to pay for their services when things with law enforcement go sideways with no resolution in sight. Eric Beaumont is an expert hostage negotiator who has been in the field for years after he left the FBI. He helps resolve situations by negotiating with criminals and terrorists in kidnapping cases that usually involve ransom. He's assisted by Oliver Yates, a psychologist and by Zara Hallam, an ex-police officer and mother of two children.

In the middle of a hostage situation in Montreal, prospective hire Maxine Carlson masquerades as a CR employee to help Eric resolve the hostage crisis. However, Oliver refuses to accept her into the company for she and Eric share a tragic past...

The show has ended after three seasons.

The show provides the following tropes: