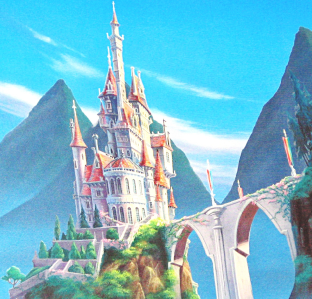 Looks pretty nice when not cursed.
"Once upon a time, in a faraway land, a young prince lived in a shining castle."
— Narrator, Disney's Beauty and the Beast
Advertisement:

A classic trope within Fairy Tales, the Bright Castle is a beautiful structure usually owned by a monarch, magician or powerful creature. It is picturesque, but sometimes cursed or with a dark secret. It can also be the home of the protagonist, who often must either leave the sanctuary, or save it from imminent doom. Expect to see lots of towers and turrets reaching for the sky, and not as much thought given to making it defensible.

The Bright Castle may also contain the MacGuffin, or Deus ex Machina that the heroes need. It can also represent an ordeal or trap that they must overcome to better both themselves and their cause. May also be a Big Fancy Castle. Often a feature of the Shining City.