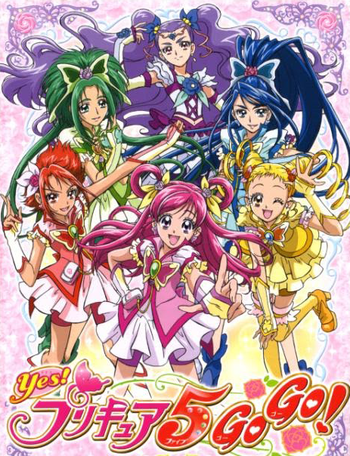 "The great power of hope! Cure Dream!"
"The red flame of passion! Cure Rouge!"
"The effervescent scent of lemon! Cure Lemonade!"
"The tranquility of the green earth! Cure Mint!"
"The blue spring of intelligence! Cure Aqua!"
"The blue rose is the proof of secrets! Milky Rose!"
"The power of hope and the lights of the future!"
"Five hearts flap their wings to magnificence!"
"Yes! Pretty Cure 5!"
Advertisement:

Yes! PreCure 5 is the fourth entry in the Pretty Cure franchise. The title comes from the fact that this time, there are five Cures instead of two.

Nozomi Yumehara is an energetic though dimwitted girl who is Desperately Looking for a Purpose in Life. She meets a hot guy in a chance encounter, follows him into the library, and before she knows it her belief in the importance of following your dreams has turned her into a Magical Girl with a sidekick who looks like a yellow plush tanuki. Within a few episodes, she's assembled a complete team:

With the help of extradimensional tanuki duo Coco and Nuts, their goal is to collect fifty-five creatures called Pinkies in order to complete the "Dream Collet", enabling it to grant a single wish and restore Coco and Nuts' destroyed homeworld. Though you would be forgiven for forgetting about this subplot, since Pinky-collecting is usually treated as an aside when nothing else is going on. The majority of screentime is given to the Pretty Cures' fight against the Nightmare Group, an evil corporation who wish to steal the Dream Collet for their Big Bad queen, the mask-wearing Despariah. Later, the Pretty Cure get another ally in the form of Milk, a rabbit-earred mascot creature who gives them their Mid-Season Upgrade.

Yes! produced more than a few waves in the Western fandom when it discarded many of the synonymous Pretty Cure tropes in favour of a more traditional formula. Despite this, the character development is good, the action is solid and it still retains some of the fistfighting combat and Postmodernism that makes Pretty Cure stand out in the Magical Girl genre. It also started the trend of having every transformation phrase and special attack include the phrase "Pretty Cure" (where previously it was confined to the Finishing Move).

Yes! proved popular enough to get a direct sequel called Yes! PreCure 5 GoGo!. After upgrading their powers, the Pretty Cure 5 team is recruited to protect the mysterious Cure Rose Garden from Eternal, an evil museum that steals and stockpiles priceless treasures from across the universe. To do this, the Pretty Cure have to track down the four missing rulers of the kingdoms that neighbour the Kingdom of Palmier, as they hold the four keys that unlock the path to the Cure Rose Garden.

GoGo! had a Non-Serial Movie in the form of Yes! Pretty Cure 5 GoGo! The Movie: Happy Birthday in the Land of Sweets.

Along with new mascot creature Syrup, an orange flying penguin mailman, the Pretty Cure get a Sixth Ranger: