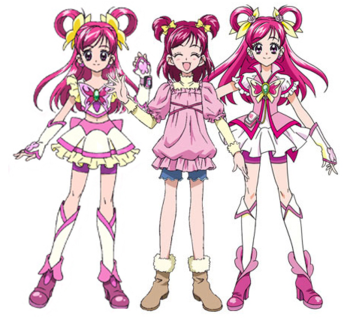 "Ketteeei!"English It's decided!
"The great power of hope, Cure Dream!"

An airheaded girl who can't seem to concentrate on just one thing and pretty much talentless and had no idea about what she really wanted, although she believed in the importance of reaching out for her dream. She's a second year student in L'Ecole des Cinq Lumières. She bumped into Coco in her school's library and after an encounter with the Nightmare, she was chosen to become Cure Dream and decided that she's going to restore Coco's Palmier Kingdom and see through it to the end... this time not losing sight of that. Along the journey, as Coco posed as their teacher, Nozomi also discovers her own dream that she'll reach out one day: to become a teacher. 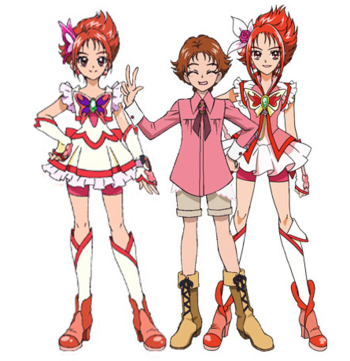 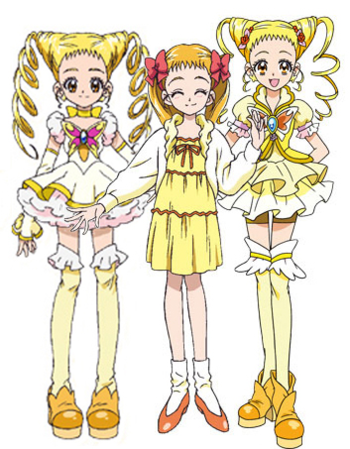 "The effervescence of bursting lemon, Cure Lemonade!"
A freshman in L'Ecole des Cinq Lumières school and an idol in training. Due to her busy schedule, Urara usually kept to herself, and her shy attitude doesn't help, although when situation calls it, she can ham things up. However, Nozomi barges into her life trying to befriend her and after an encounter with the Nightmare, her desire to protect her new friends led her to become Cure Lemonade. Afterwards, with her new friends, Urara began her journey not just as a Pretty Cure, but also evolving into a world-class idol. 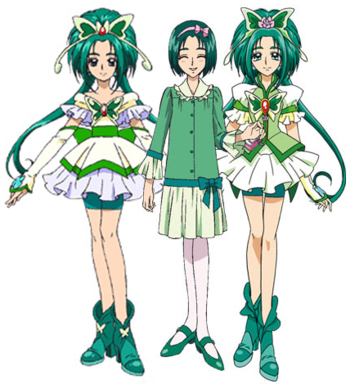 "The green earth of tranquility, Cure Mint!"
A third-year student of L'Ecole des Cinq Lumières and usually volunteers to manage the library. Komachi is the daughter of the head of a famed sweets shop. She's calm and assuring, but is pretty scary when she snaps. She's also a novel writer, thus easily getting excited over unnatural things. This 'unnatural thing interest' led her to follow Nozomi, witness the Nightmare, and becomes Cure Mint. Aside of her being a Precure, Komachi also got her novel reviewed by Nuts, also developing a crush on him. 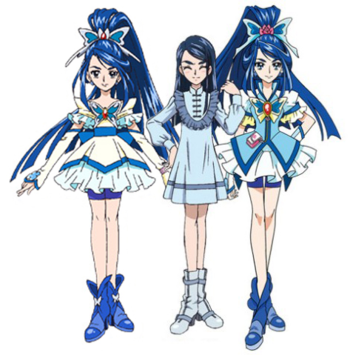 "The blue spring of intelligence, Cure Aqua!"
A third-year student of L'Ecole des Cinq Lumières and the Student Council President. At first she thinks the Pretty Cure thing is a farce, but was forced to believe it when the Nightmare invaded her house. But then she failed to become a Pretty Cure due to her 'do-things-herself' mindset. Despite so, Nozomi continued to bug her about becoming a Pretty Cure, and after realizing that she wants to protect her friends, Karen is able to become Cure Aqua. During the course of the series, she develops a rapport with Milk and discovers her dream to help those who are sick, and she starts learning on how to become a doctor. 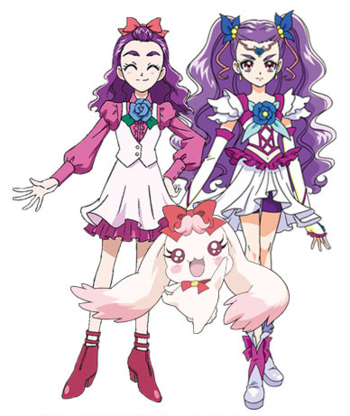 "The blue rose is my secret emblem! Milky Rose!"
A rabbit-like mascot who is Coco and Natt's caretaker but has no ability to assume a human form. Initially unscrupulous around the Yes Pretty Cure 5 team, she slowly warms up to them. In Yes Pretty Cure 5 GoGo, she picks up a Blue Rose seed which granted her a human form and the power to become Milky Rose.

A prince of the Palmier Kingdom who heads off to Earth to find the Pretty Cure to defend his kingdom from the forces of Nightmare. He can assume a human form to get close to the Cures. 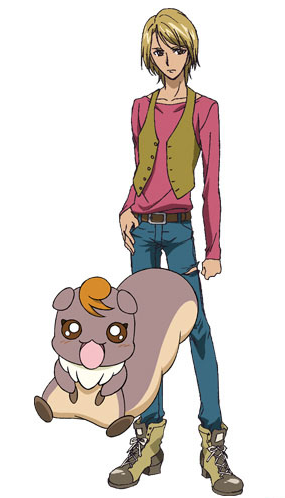 The Palmier Kingdom's second prince who is trapped in the Dream Collet. After being freed, he is initially distrustful of other. However, he warms up to the Yes Pretty Cure 5 team. 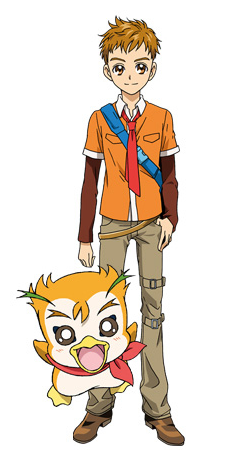 A bird-like delivery fairy who is amnesiac and dreams of the Cure Rose Garden. He intends to search for the Rose Pact to gain access to the garden and cure his amnesia. 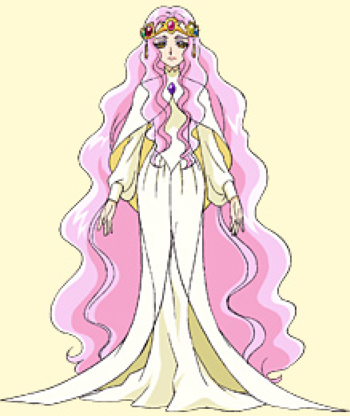 The guardian of the Cure Rose Garden.

The first villain to appear in the series. Girinma is one of Bunbee's three subordinates. His true form is a humanoid praying mantis. After many defeats, Bunbee gives him the black card which is actually a black Kowaina mask, and despite risking to lose his personality, he puts the mask on it to prove his loyalty and becomes a Kowaina.

He's one of Bunbee's subordinates, until he deserts from Nightmare after his first defeat. He always try to get payment from different jobs to buy money, but he never keeps a job. His true form is a humanoid toad. Kawarino tricks him by offering him a high ranked job in Nightmare, but the black Kowaina mask transforms him into a Kowaina.

Bunbee's female subordinate, but she doesn't respect him much. Her true form is a humanoid spider. Kawarino gives her the black Kowaina mask to give her a last chance, becoming a Kowaina in the end.

Bunbee is the boss of Girinma, Gamao and Arachnea. His true form is a humanoid bee. He suffers from his department's failures and he's often criticized by Kawarino. After Gamao deserted Nightmare and Girinma and Arachnea's deaths, his department is disbanded and he becomes the subordinate of the members of the second department. He confronts Kawarino about his sneaky methods, but he's almost killed by him. After the defeat of Nightmare, he joins Eternal in the sequel, working as a subordinate for several villains, but ultimately leaving them and he becomes an ally of the heroines.

The female and arrogant member of the second department who enjoys to boss Bunbee around. Her true form is a humanoid bird. After several defeats, Kawarino forces her to wear a black Kowaina mask, becoming a Kowaina herself.

A veteran member of the second department who always transforms rooms into Kowainas. His true form is a humanoid bat. He was also Kawarino's previous superior. After several defeats, Kawarino puts a black Kowaina mask on his face and traps him in the darkness, but in the Grand Finale, Bloody comes back and drags Kawarino with him down.

Kawarino is Desparaiah's secretary, and one of the three core members in the second department. He's sneaky, feels no sympathy to anyone, but the most powerful employee of Nightmare. His true form is a gigantic humanoid chameleon.

Desparaiah is the leader and employer of Nightmare. She's extremely powerful, considering that Kawarino's loyalty to her, and her wish is gaining immortality and eternal youth. She hides her face under a mask until the Dream Collet grants her wish.

An honest but short-tempered member of Eternal and the first general to confront the Pretty Cure.

Another member of Eternal and the third general to confront the Pretty Cure, after Bunbee.

A mushroom-themed general who initially retired from Eternal, but got rehired to confront the Pretty Cure.

A pair of generals who serve as Eternal's hunters.

A cockroach-themed general who is good-looking but cunning.

A snake-themed general who is Eternal's administrator.

The leader of Eternal who is intent on conquering the worlds to add to his collection.

Tropes associated with the Director:

Characters appearing in Yes! Pretty Cure 5 GoGo! The Movie: Happy Birthday in the Land of Sweets have their own page here.

The ruler of the Mirror Kingdom.