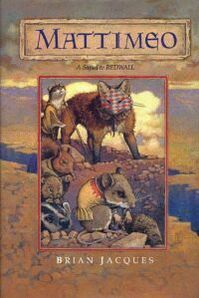 After eight seasons of peace in Mossflower, a sinister masked fox plots to steal something precious to the woodlanders of Redwall Abbey: their children.
Advertisement:

Mattimeo is the third book in the series, though chronologically, it follows Redwall and precedes Pearls of Lutra. It was published in 1989 (1990 in the US). It was adapted into the second season of the animated Redwall TV series in 2000 and ran for 13 episodes.