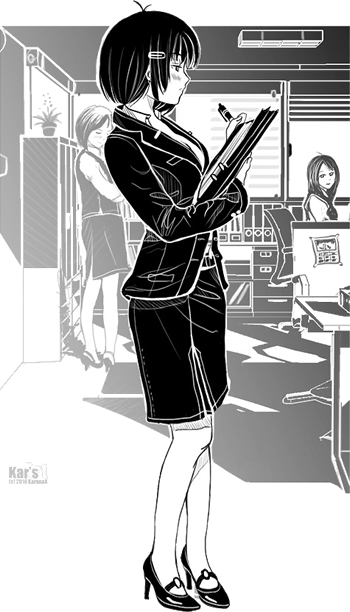 A Gratuitous English Japanese term — often abbreviated to "OL" — for a low-level female employee in a corporate setting. Although she may have higher aspirations, the usual Japanese corporate sexism frequently keeps her fetching coffee, fending off sexual harassment, and forever clinging to the bottom rung of the office ladder. The Western equivalent would be the "glass ceiling".

" was selected for being attractive and gracious to clients and expected to work for only a few years (just long enough to meet a nice young executive to marry), so it was not considered a "real" career. Some companies have OLs on separate career tracks to their "real employees" (who would generally be expected to stay with the company for their entire working life, and progress up the corporate ladder accordingly) — and give female hires a choice of which track they want to be on.

Generally treated as the expected employment path for a respectable young woman, Office Ladies are often used as shorthand for an employed, responsible adult woman (in contrast to the teenagers who populate most manga).

In works for teenagers, the Cool Big Sis or the one taking care of her younger siblings is likely to be an OL, while in josei (women's manga), it's a likely career for The Protagonist. In seinen (men's manga) there is also often a titillating aspect to OL characters, since OLs are traditionally supposed to be good-looking, attentive to men and unmarried, so it's a likely choice for Ms. Fanservice or the Love Interest. She will also likely worry about trying to find a husband and having children.

Office Lady characters played straight are a bit more common in dorama (Japanese "soap operas") than they are in anime, although Punch Clock Villains and female Mooks are sometimes depicted this way.

If OLs are in a particularly violent anime or manga series, regardless of their allegiance, don't expect them to live long.